Brilliantly presented and action-packed throughout, The Student Body, is a terribly good story – Graham Beattie

Any writer of crime fiction would benefit from learning about the nuts and bolts of a murder investigation. And what a great way to learn – this stop being a lesson as the story takes off at a cracking pace with strong characters and a high page turning factor – Trish McCormack

Finalist for the Ngaio Marsh Award for Best First Novel 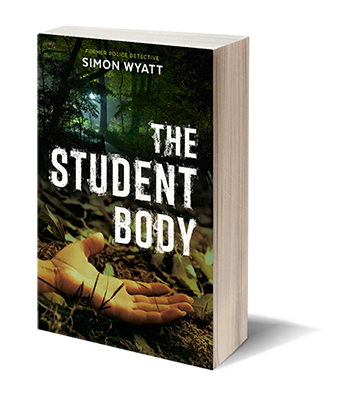 IN THE STUDENT BODY, SIMON WYATT TAKES THE READER ON A THRILLING JOURNEY TO CATCH A KILLER THROUGH HIS EYES AS A FORMER POLICE DETECTIVE.

A popular fifteen-year-old girl is strangled to death at a school camp on Auckland’s west coast. The posing of the body suggests a sexual motive. Nick Knight, a week into his role as a newly promoted detective sergeant, is tasked with the critical job of leading the Suspects Team.

Nick – who turned his back on a lucrative career as a lawyer – is well-versed at dealing with the dark sides of human nature. With no shortage of suspects, he sets a cracking pace on the trail of the murderer, grappling his own personal demons along the way. But are things really as they seem?